Whiskey taster as a full-time hobby

Theis Steen Hansen, 39, is a farmer by education. But when his farming dream crumbled during the financial crisis, he, to start with, became an ordinary employee in the farming industry. This is not a good fit for Theis, and now he can’t shake the idea of being self-employed. In 2015 Theis and his wife are considering opening a web shop that sells clothes, which at the time the wife was meant to run. The idea never goes any further than this though, and the plan is shelved. “But I couldn’t shake the idea of becoming self-employed and starting a web shop” Theis says. He has always wanted to work for himself and since his teenage years he has dreamt about having a web shop. After considerations about the content on the page, it becomes Water of Life, where he sells whisky, other liquors, and tastings and so on. In his now fifth year in business, Theis has gone all-in. He has thrown himself into it full-time with all the challenges and unforeseen costs that brings. 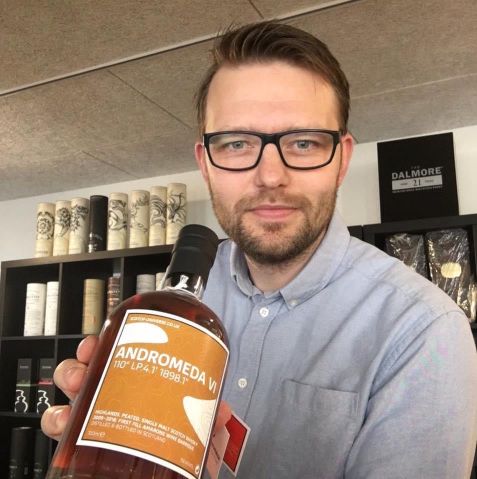 Suppliers give a long line of no’s

Theis does not hide that there has been a lot of challenges along the way. One of the first ones happened already with trying to find suppliers of the whisky. Theis explains: “There are all these wholesalers and importers of the known whisky brands, but I just got one no after another. They just simply wouldn’t deliver the goods.” This surprised him and he explained that the suppliers got about five inquiries a week that were all young people wanting to start a web shop with their products. The suppliers experience with these customers were not very good, and they were therefore very critical about which customers they took on. So, this meant a closed door for Theis as well.

Luckily it wasn’t a no from everyone, as Theis says: “I finally found some wholesalers. Here the advance was less, because it has passed through more hands, but there was a bigger chance of getting the right whiskeys, in which I can be stock bearing.”

After some time this just lead to the next challenge though. The wholesaler he did business with went bankrupt, and now Theis had no supplier. He was therefore forced into a second round of supplier searching. “I had to go out and ask around with importers again. But this time it was like they were more willing to make a deal because they could see that Water of Life still existed. Therefore, I had to be for real” Theis says, and he is once again full steam ahead with working things out. Since then, it has been hit after hit, and Theis has gotten a foot in the door with several places. Finding the suppliers was a tough nut to crack, and it took a lot of hard work, as it is also about creating a brand and network in the business.

Theis says that the biggest challenge he faced was that in the beginning he thought that when the goods were on the digital shelves then they would sell themselves. He says: “A challenge arose where I actually had to go out and do some legwork to get this sold. So, looking back that was probably a “rookie mistake” where I thought things would be a bit simpler than they really were.” It takes work to market yourself and create a brand in the customers consciousness. Theis says that over the five years the business has existed, he has used an inconceivable amount of time on marketing and the business side, instead of cultivating that which was the original interest; whisky.

In addition, he learns along the way that the market for whisky is not that big, and that there are just not enough buyers in Denmark. He is moving in on the rom- and gin market where the demand is quite bigger. Other than that, it was also that Theis found it necessary to have a physical presence. When he sells the product that he does, the customer needs the option to feel and taste it before buying it. The digital shelves are therefore not enough, and at the same time he has to spend a lot of time attracting customers. But is it in marketing that his drive and skills lie?

In these situations, it is beneficial to draw on the network, where Theis says that Anders Fogh, CEO and founder of Startup Central, has been a great sparring partner, that he could draw on along the way. Theis says: “I am a bit all over the place with my thoughts and ideas sometimes, and that’s when Anders can just interject the right questions about whether this is a good idea or not. A couple of years ago he also helped me narrow down what my mission really is, what Water of Life truly is. So, I use Anders in a big way as a sparring partner”.

Since Theis has the physical spaces and dreams of being able serve whisky directly to the customers, it will now also be necessary to get an alcohol license. He now knows he will get a permanent alcohol license within a year, so then the dream of an outdoor service area and bar can be fulfilled. Startup Central has also been most helpful here, as Theis got in contact with a coach that guided and helped him along with the process. “There is a paper-thin line between serving alcohol and making money from it. If you are going to profit from it, you also need to have an alcohol license,” Theis says and continues: “I have over time done some tastings, where in the beginning I didn’t quite know if I was doing something illegal by having those tastings. But I got it confirmed from one of Startup Central’s coaches that I was not.” A coach can be very helpful with some consultation in these kinds of situations. Especially if it is not something you have the most insight into yourself.

What is your advice for other entrepreneurs?

“My biggest takeaway from the startup journey is probably that running a web shop is not as easy as it looks”. Theis has experienced that it takes legwork to get your products out to people. He says that we always hear about web shops killing the physical business life, but that has certainly not been the case for him. It’s great to have a web shop, but if Theis didn’t have a physical presence where the customer can feel, see, and taste the products, then he couldn’t run his business: “I wouldn’t be where I am today if it wasn’t for my physical presence. In the liquor business it is just two things that go together. It is great if you have a web shop, but if you don’t have a physical presence in the form of a show- or physical store, then I don’t think you will get far”. The advice for new entrepreneurs is therefore to really think about how you can best possibly sell your product to the customer. It is about designing your business, so it makes the most sense for the customer. They will prefer to choose the business where their value proposition is the biggest.

Besides that, Theis has also learned that it can be a long way to the top, and that you should work on what you think is fun: “I see a lot of people running around in their safe and secure fixed income, and that is of course nice- but often they are not content. And again, I hear about people my age, in their 40’s, they do a good job, but it will always be the employer that benefits the most from their hard work” Theis says. He adds that a good idea isn’t always easy to pitch to a boss, as he most likely also has to pitch it again further up the ladder. And that can be difficult because is he as passionate about it as you are, or does he have a bunch of other things to deal with?

The best advice from Theis to others with entrepreneurship dreams is, if you believe in your own idea then jump right into entrepreneurship – sooner rather than later. He hadn’t made any grand plan himself and says that even if he knew in advance how much it would take both of time and money, he still would have jumped into it. And basically, there are no feasible plans that would be able to cover all the unpredictable possibilities ahead. Theis says: “Just as you think you got the income under control, then there is an unexpected expense, like a fee from the government or the bank that you weren’t aware was coming. Something always just pops up, so let’s just say that it hasn’t been cheap to be an entrepreneur and those kinds of expenses really cut into the small profits you might have. But that still wouldn’t have changed anything about me jumping into this anyways. It has been an awesome journey, and I have jumped in headfirst”.

You can visit Theis in the showroom on Bredgade 2B, ST, 8740 Brædstrup. Besides that, you can see Water of Life’s products and arrangements on the website, where you can read more.

At Startup Central we are happy to follow Theis’ entrepreneur journey. His story shows that you succeed at what you’re passionate about if you keep fighting. You may hit bumps in the road, but then seek out those in your network as they can maybe help.

Get the latest news from Startup Central and stay updated on what is happening in the entrepreneurial community.

You are now subscribed to Startup Central's newsletter. You will soon receive relevant and informative newsletters in your inbox.